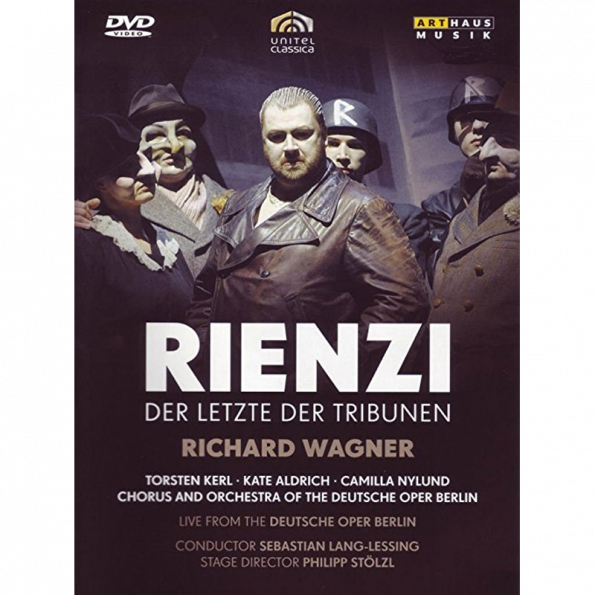 Richard Wagner’s early opera ‘Rienzi’ is stylistically closer to Meyerbeer and bel canto than to Wagner’s later masterworks. Yet even this early work especially as presented in this recording is ‘so fantastically beautiful that it takes one’s breath away’ (Berliner Zeitung). And in this staging by Philipp Stölzl, who condensed the five-act opera into a little over two hours, ‘Rienzi’ becomes a startlingly powerful and timeless parable of power and abuse. Though the story of the rise and fall of a charismatic leader and his totalitarian regime takes place in 14th-century Rome, Stölzl sets it somewhere in the recent past. The topic ‘anticipates the history of the 20th-century in a visionary way’, says Stölzl, adding that ‘one can make surprising analogies to many despots of this time: Stalin, Mussolini, Hitler, Ceausescu…’ Since film was a central propaganda tool of 20th-century totalitarian systems, Stölzl uses film projections to make the ‘tribune’ Rienzi tower above the masses or, in the style of old newsreels, to show a utopian ‘New Rome’. It is, after all, with films that Stölzl began his career: directing video clips for Rammstein and Madonna, then directing feature films (‘North Face’, ‘Goethe!’) and staging operas at major venues, including the Salzburg Festival. Tenor Torsten Kerl, who has visibly studied the gestures of the 20th century’s major dictators, gives a brilliant and eloquent Rienzi; his dutiful sister Irene, sung by Camilla Nylund with great lyrical intensity, is paired with a lover, Adriano, interpreted by the luminous mezzo Kate Aldrich, ‘the discovery of the evening’ (Süddeutsche Zeitung). Also worthy of lead-role status is the chorus, which masters its demanding part with stunning presence and accuracy. The orchestra of the Deutsche Oper Berlin is led with exuberance and precision by young conductor Sebastian Lang-Lessing.

A production of Unitel Classica in cooperation with Deutsche Oper Berlin, ZDF/Arte and Arthaus Musik